Some time ago, i attempted to create an account and send some funds over to Gamdom.com. This was due to having some ETH tokens left in my account and if my memory serves my right it was approx € 500. The main reason was due to the selection of live games, and for example the bonus buys on Dead or alive. Just wanted to give it a try with such offerings. From my account of Binance ive send (on accident) 500 euro in ERC20 tokens to the given adress instead of ETH. This is a mistake ive obviously done myself, but i coud’nt be fooled by the stupid and misleading interface binance offers. After i refreshed over and over again at Gamdom, the balance just never was there. What went wrong here? I did play in the past on a few crypto based casino’s where i turned 4 ETH into 24 ETH with payout within 30 minutes. In todays value we would be looking at ~ € 3500 x 24 = € 84000. After i contacted support here did things went wrong…

Support responded after 3 working days that the money did not came in. Even tho i clarified my own mistake by ERC20 instead of ETH, there was nothing that they (would) do and i lost a deposit of € 500 pretty much. The wallet owner could technically convert or return the sended funds and recover the mistake that was made. But Gamdom did’nt bother to respond. I think i’ve send over 6 emails in the next 2 weeks and realise they just dont give a shit. When i asked my question on forums like Reddit someone advised me to contact Tether. Tether is pretty much the organisation behind ERC20 that does have tools to revert or recover lost transactions. This was a simular case and there was solid ground for Tether to pick it up. Once i emailed Gamdom that i involved Tether into the party, suddenly gamdom could respond. Weird eh after being ignored for more then 2 weeks here. They knew who Tether was obviously.

However, since i brought both party’s into touch with one and another, some time passed by. There was a chance that Tether could recover the lost funds. But the attitude of the casino and in particular support was driving me nuts. After another few weeks that passed by, finally Tether answerred with that they where not able to recover the funds, since the other party (Gamdom) did’nt approve for such sollutions. Bottomline: funds completely lost, Gamdom never bothering to respond to any ongoing issues or tickets. Once i complained to Ayezee back then the guy booted me out of discord. He coud’nt have bad critics about the casino he promoted. Its that moment you realise how this world, streamers and such is about pure greed and zero fucks given. I dont care really; € 500 is what i make on a avg good day in my profession. But the whole situation has led me to a bad taste in my mouth. Gamdom could have a loyal player here.

When you look at reviews on Trustpilot for example, i realised most of the “bad” reviews are being removed fairly quickly. Even tho i wrote a legitimate review and had all the evidence to it, Gamdom had the review flagged and removed from such pages. I noticed an extreme “positive” amount of reviews suddenly over days, which was part of a promotion that people could get free playing money in return for a positive review with their username. Ive posted my thread on Askgamblers.com, they removed it too (!) while it was objectively based including evidence. Askgamblers is another shitty website where paid reviews as part of a marketing plan often happens. I’m not joking. When you do place a review about a casino, you’ll get often emails with new reviews about certain casino’s, and often do leave a very remarkable note.

Often, one hands washes the other, and so does the train of (big) money continue on, tricking unsuspecting or new players who register for such places, into a mouse-trap or simply put money pit with no ending. Often accounts where closed, payouts not processed, withdrawls cancelled and taken. Ive seen quite enough at this point with these unregulated, crypto casino’s often promoted by casino streamers. Again it’s not about the € 500 here, but the uninterested attitude of support or the casino in general that sacks their players for no good reasons other then collecting their money. If you ever question to play at Gamdom, read up on the few dozen of negative reviews on this casino. Trust me it’s a good signal to determine if this place will do you any good or not. We’re not talking about bonus or free give away complaints, more important is how they deal with customer support, payouts or verification(s).

If you would require further assistance, please contact us at [email protected] and we will be happy to answer all your questions.

Only problem is, they never reply. And this is a commonly seen reply to cases with no endings. They just ignore their players, customers to death because they have zero to none legal consequences to this matter. If you question the legitimacy, well if i had an small issue with deposit imagine the problems you or another will face when attempting to withdrawl a big sum. Support wont answer you, they just dont bother.

Edit: As i was writing this story, in that time gamdom introduced a country restriction based on where i am or was. It seems that, the notice can just be clicked away, and used to login with your account (or register on that behalf) again. I did had my old account still stored in the browser, and i can deposit straight away while there SHOULD be a account restriction in place due to the country i am in. 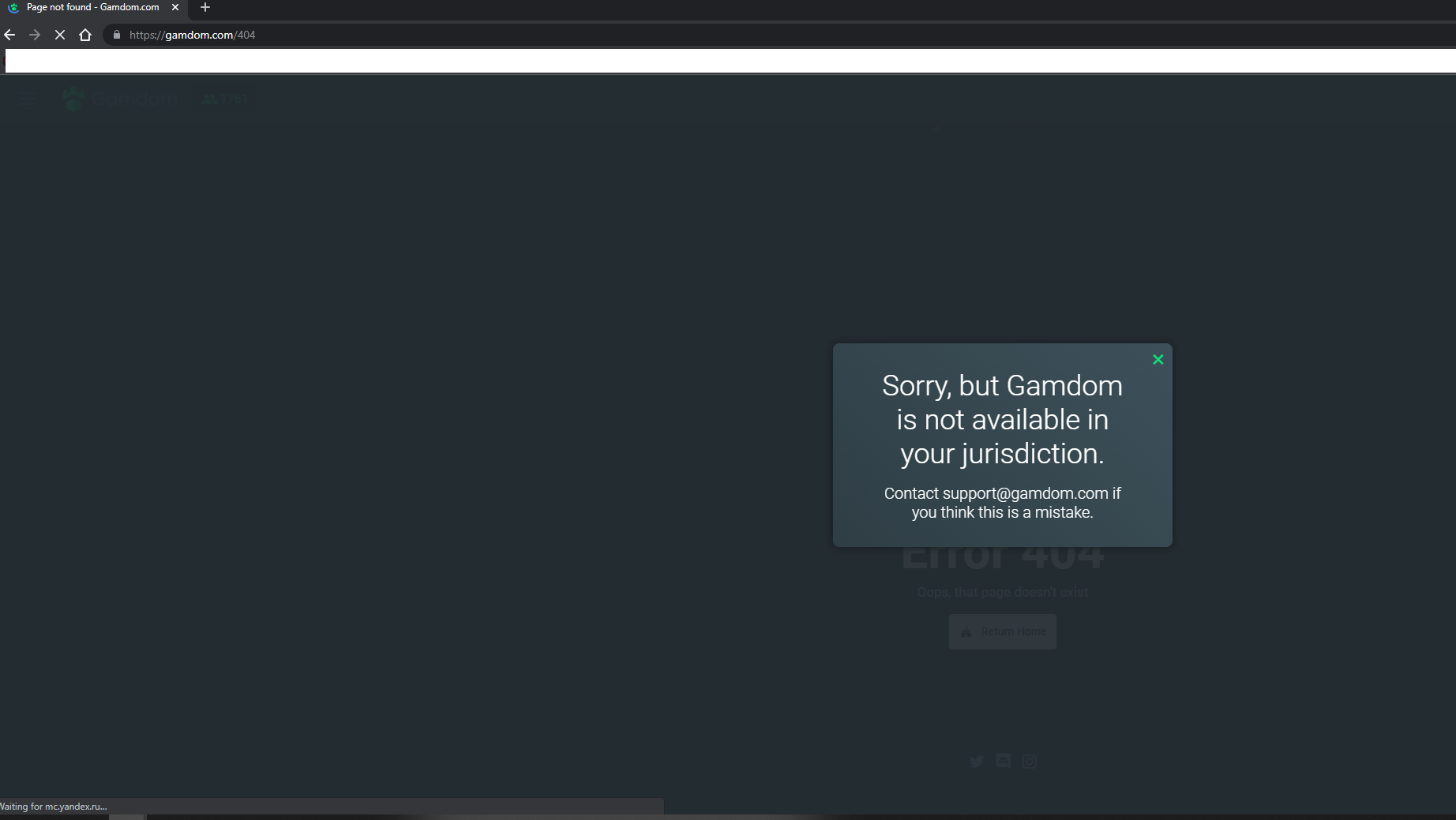 This is an extreme good situation of a very bad casino, that does’nt uphold any KYC, self-exclusion, self protection and is eager to still take people’s money from other country’s even when they do not have the licensing or permission to do this. And this is exactly what the whole debate about rogue streamers, offshore casino’s is about. Ive already contacted the regulator in the country i’m resident in. And published my findings on forums and twitter. The larger exposure this casino gets about the practices, the faster people realise not to deposit or play in the first place here.